I’d rather be an Iphone

– Part of the NODE17 Closing Evening

Can humanity hope for a better future, or is the game is already (almost) over?

Post-digital electronic music and performance project BBB_ rises the question with an outlook into the “future that already happened”. In their strange and mysterious world BBB_ creates various performances where digital technology is seen not a tool, but a phenomena that constructs social, emotional and irrational aspects of our lives today, and helps us to redefine relations between technological and natural worlds and a position and a role of a human and a humanity at large in it.

Their performance I’D RATHER BE AN IPHONE, along with their first music album release of the same name, is a play on the intersection of utopian and dystopian visions of the future that is already happening, it is a tale of partly-digitalised bodies, cyborgian-like species born to the world that had rapidly obtained a tremendous power of genesis, but is lacking a maturity to handle the complexity of the situation. In this conceptual multi-layered performance artists mediate their futuristic visions with electronic music, live-synthesized voice, emojis, visual poetry and their intense physical presence, with a theoretical approach towards trans-post-humanism, body enhancement, AI, biotechnology and robotics.

The title of the performance is taken from the statement “I’d rather be an iphone than a woman” by British theorist and feminist Helen Hester. “I’d rather be an iphone” is not only the title of the performance, but also of BBB_’s first music album. The album is accompanied by a booklet, containing a downloadable version of the album, as well as bonus tracks, videos, animations. With the Augmented Reality App “Aurasma”, the booklet can be brought to live. 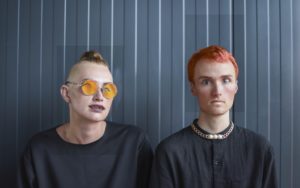 BBB_ is a post-digital cross disciplinary project, working at the interface of music, performance, art, design and philosophy. Behind BBB_ is the artist duo Alla Poppersoni and Alexander Sahm. Their work is a reflection of emotionality and irrationality in a world of global forces, Big Data and intelligent technologies. Poppersoni and Sahm present themselves as a mediator between digital and physical realities. While Poppersoni speaks conceptional lyrics in her own and synthesized computer voice, Sahm accompanies them with electronic Sound-Ready-Mades. The relinquishment of the stage transforms the performance into an intensive, club-like experience for the audience.